Animal cruelty and abuse is caused when hoomans cause harm, suffering, starvation, neglect, abandonment, and/or pain to animals. I do not and will not ever understand how a hooman could hurt a dog, a kitty or any other animal, but it happens. A lot.  We must all work together to create awareness of the issues and to help save the animals in crisis.

How can you help??

Did you know that many hoomans who abuse animals also currently or will in the future abuse their spouse, domestic partner, or children? Animal abuse can also be a precursor to psychopathic behaviors and serial killers. Saving an animal from abuse (even if they have passed) can help to save hooman and kiddo lives too!

Unfortunately, the punishments in many states for those that commit animal abuse, animal cruelty, or animal neglect are not very harsh. I fully support making laws stronger, creating new laws, enforcing existing laws, and punishing those who hurt animals (as well as accomplices)! Maximum penalties!

We know fur sure that 5 of our 8 furfamily have been abused or come from bad situations. The other 3 were all adopted as kittens from animal shelters so we are unsure of their beginning. THIS is why I take a stand against animal abuse. It’s so close to home.

Pawlease take a stand against animal abuse and help us fight for justice!! #SaveThePuppies

Be the first to know about upcoming events & fundraisers, and new blog posts from Milk!

Hiya Pupsters! It’s time for Santa Paws to visit everypawdy again to deliver toys and treats to all the good furbaby boys and girls waiting in a shelter or rescue for their furever homes! We want to make sure the kitties and puppies and dogs have a holly jolly howliday! I can’t do it alone, […] 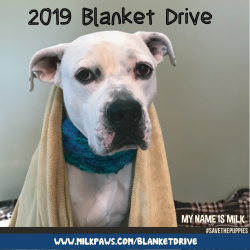 Help the MilkZoo earn more bones for kibble by shopping with these providers!